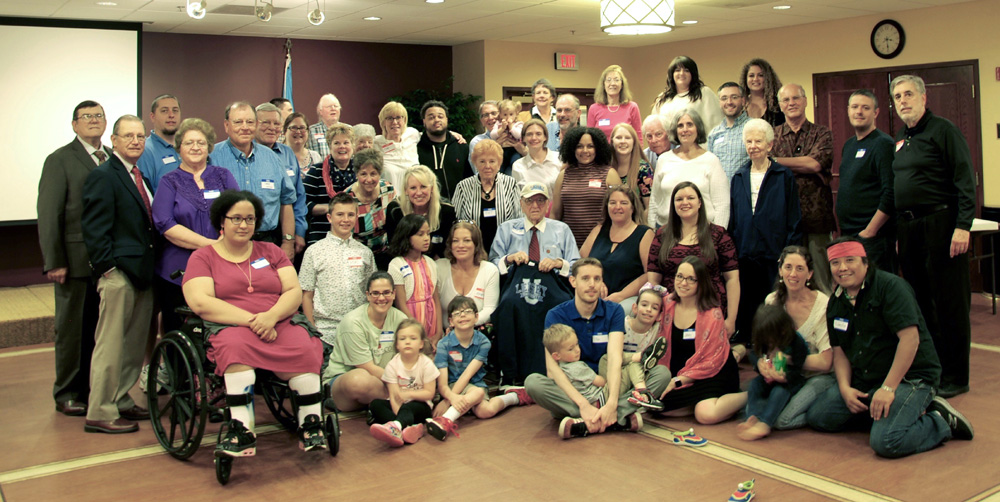 Alvin Lewis Leisey, Jr. celebrated his 95th birthday on May 13, 2018 with 87 guests and relatives gathered for the occasion in Elizabethtown, PA.

Alvin is the second longest-lived male in the Leisey family, according to tombstone records. His uncle Amos Leisey (long-time member of the Pennsylvania Legislature) lived to the age of 96.

Family members who gathered for the 95th birthday celebration for Al at the Masonic Village in Elizabethtown included 5 of Alvin and Mary Helen’s six children: LaLoni, Randall, Mary Ellen, Ronald and Kimberly. The youngest daughter, Kathryn, is deceased but was represented by her children Sasha and Trey from Philadelphia. 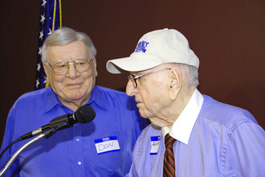 Al’s youngest brother, Don and his wife Pat, were also in attendance with family members from northern California and Las Vegas, Nevada. The other members who had traveled a distance to be there were son Ronald and his wife Cynthia, from Texas, and their sons from Arizona, Paul and Eric.

The attendees beyond the family came from multiple states and directions and helped to make the occasion a beautiful time for remembering the various segments of Al and Mary Helen’s life together. (Mary Helen died four years ago.)

The segments of Al’s life are significant and wide spread. He was born in Birdsboro, Pennsylvania and later lived east of Honey Brook, PA, where he went to High School and fell in love with Mary Helen Abbott. He then enrolled in college at Penn State, but Al left college after the first semester when Pearl Harbor was bombed. He joined the Marine Corps and after training (and baseball pitching) at Marine Training at Perris Island, he was sent to the Pacific Islands to join in the war against Japan. Al noted that of the more than 300 people who joined the armed services from Honey Brook to fight in World War II, he was the only one to enlist in the Marines.

He was wounded twice when fighting in the Pacific Islands, and Al recovered from his injuries in hospitals in Hawaii and Philadelphia. There is a classic photo of Al Leisey in the Quantico Marine Museum (VA.) showing him climbing back over the side of a troop ship after two days and nights of non-stop fighting on one of the Pacific islands. The photo also is on the cover of six contemporary books.

When Al Leisey returned to civilian life he married Mary Helen in Philadelphia (1945) and returned to Penn State where he graduated in 1948. In his early post-grad days he lived in the area where he was born. He worked for Luken Steel and New Holland Machine Company. He bought his first (of many) houses in Exton, PA. And while he and Mary Helen continued to grow their family, he kept climbing the corporate ladder. He was an executive at International Latex (Playtex) in Dover, Delaware where he resided for 7 years and where Al also served the community as a School Board Member.

The next stop on this life story was when everyone moved to a beautiful, old New England home a block from the salt water in Fairhaven, Massachusetts when Al Leisey became an executive at Morse Twist Drill and Machine Company in New Bedford, MA. The first three children graduated from Fairhaven High School and left for college from this community.

His next (temporary) move was to a sky scraper in New York City above Times Square, where he worked for Universal American Corporation for less than a year, after which the entire family moved from Massachusetts to the Rochester, NY area where AL was with several corporations that were involved in the development and manufacturing of new technology that would change the way business is done and life is lived in this world.

The last "corporate move" was to Ringwood, New Jersey where AL worked as a top executive for the Minolta Corporation, which had a healthy slice of the camera business in the United States as well as a great business machine division. He was again on the school board in Ringwood, NJ, demonstrating his devotion to the quality of community life.

Having discovered the beauty and fun of the Carolina coast, they bought a vacation home in Myrtle Beach, and later Mary Helen and Al would live in retirement for 20 years in Carolina Shores, North Carolina where they would enjoy tennis, golf and the ocean. There was also a brief period, as they migrated south, that they had a condo in the Virginia Beach area, on the Chesapeake Bay.

Another item that added to their enrichment was their interest in travel trailers (early years) and later their travel in Motor Homes. There are few places in North America that Al and Mary Helen didn’t see.

The final destination for Mary Helen and Al Leisey has been the Masonic Village in Elizabethtown, PA. They spent years in one of the cottages, and then a year after Mary Helen’s death, Al moved to an apartment in the same village which made life easier for him.

And to go full circle. Back to the 95th Birthday Party of May 13, 2018... Al declared it the "best day of my life" which is quite a testimony because Al Leisey has had a lifetime of great days and accomplishments!